We use cookies to give you a better service. Continue browsing if you're happy with this, or find out more about cookies.
Free UK Delivery on orders over £60*
Leading UK First Aid Manufacturer
Over 4000 products available in stock now
Home / Safety First Aid / Lyme disease symptoms and prevention

The tiny tick is one of nature’s most easily overlooked dangers.

The tiny tick is one of nature’s most easily overlooked dangers. If you’re working or spending leisure time outside in woodlands, heathland, moorland, or even just in grass over spring and summer, you need to be aware of ticks and the diseases they can carry, principally Lyme disease. People can even find them in their gardens or in parks in London. Lyme disease has become more and more common in recent years, one reason being an increase in deer numbers across the country, which ticks often feed upon. In 2001 there were 268 laboratory-confirmed incidences of Lyme disease, and by 2011 this had increased to 959.

You should know how to spot and remove ticks, and how to recognise Lyme disease symptoms too. It’s important to get Lyme disease treated, as without it, it can cause serious problems including fatigue, joint pain, partial paralysis, nerve damage, meningitis and heart problems which develop months or years after.

Where are you at risk from Lyme disease?

Ticks which potentially carry Lyme disease can be found right across the UK, but they are more common in certain areas. Infection with Lyme disease occurs most frequently in Exmoor, the New Forest, the South Downs, Surry, West Sussex, the Lake District, the North York Moors, Thetford Forest, and parts of Wiltshire and Berkshire. However, Matt Dawson, a former England rugby captain, was bitten in a west London park and, as a result of misdiagnosis by his GP, he was found to have Lyme disease much later, by which time damage had been done to Dawson’s heart.

Lyme disease is found across Europe too, and is particularly prevalent in the north eastern United States, where the number of Lyme disease infections is much higher, at around 300,000 per year. In the UK its thought that a few thousand cases are treated by GPs each year, but due to misdiagnosis or people not realising they’ve been bitten, the real number of infections is thought to be higher.

The Big Tick Project have a UK tick risk map and information tool that you can check here.

What is a tick?

Ticks are tiny arachnids which feed on the blood of animals, including humans. There are about 20 species in the UK, but the tick known as the sheep or deer tick, Ixodes ricinus, is the usual culprit of Lyme disease. This tick feeds on almost all animals, including mammals, birds, reptiles, and most troublingly for us, humans and our pets. Having a pet cat or dog makes contact with ticks particularly likely.

Like spiders, ticks have eight legs, but they can be difficult to spot. The larvae can be as small as a tiny freckle, while after gorging on blood, females can swell up to the size of a baked bean. You will want to remove them before this point, however, and their small size can make them hard to spot and hard to remove too. Young ticks, known as nymphs, are only around a millimetre and a half long before feeding, while adults of both genders are between 2.5 and 3.5mm long. Ixodes ricinus is usually a reddish-brown colour, but can appear a silvery grey when gorged on blood. 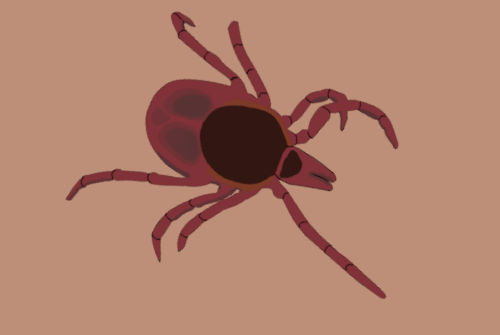 The way ticks behave complicates spotting them. Ticks wait on vegetation with their front legs in the air, waiting to latch onto passing animals, including us. Although they’ll very often climb on to legs, they often won’t feed immediately, but will crawl along the skin to an area like the back of the knees, armpits, the waist or groin before feeding. Ticks generally prefer warm, moist parts of the body. Some people find them on their scalp, and overhanging vegetation can also be a tick habitat.

Tick bites are often painless, so it’s important to check for them if you’ve spent time in a tick habitat. Ticks will stay attached for up to several days feeding continuously, so you’ll have time to spot them, but the faster they’re removed, the better.

How to avoid, detect and remove ticks

There are a number of measures you can take to discourage tick bites without avoiding the outdoors. Public Health England recommend walking on clearly defined paths to avoid brushing against vegetation, wearing light coloured clothing so ticks can be spotted easily and brushed off, wearing trousers rather than shorts or skirts, using insect repellents such as DEET, and carrying out thorough tick checks on both clothing and the body during and after outdoors activities.

As mentioned previously, ticks can be tiny, and like to feed in awkward areas, which can make finding them quite difficult. For young children, the scalp and hairline warrants particular attention. During feeding, there often isn’t any indication the tick is there like redness or itching. It can be difficult to spot them yourself in some places, and if you (understandably) can’t get someone else to check you over comprehensively, you should be able to feel the ticks with your fingers as tiny bumps.

The tick will essentially have its head buried in your skin, which, unfortunately, makes removal difficult. But you should remove it as soon as humanly possible. It’s crucial that you remove the tick carefully, as if its jaws/head are snapped off and left buried in your skin, this can pose a risk of infection. Despite various home remedies circulating on the internet, health professionals only advise removing ticks with very fine tweezers or special tick tools. Other attempts to kill or expel the tick may lead to it expelling the disease-ridden contents of its body into your wound.

Using fine tweezers, the advice is to grip the tick as close to its head (and your skin) as possible, taking care not to squeeze too tightly. Pull upwards slowly and firmly, without twisting. Once the tick is free of your skin, clean the bite area and apply disinfectant or antiseptic cream, then wash your hands. It may be a good idea to place the tick in a sealed bag, with the date of the bite written on it, and place it in the freezer, in case symptoms develop and you can send the tick for testing. Otherwise, place it in tissue, squash it and dispose of it, so it can’t pose a danger to anyone else. In any case, don’t handle it with your bare hands.

It’s easier to use a specialist tick removal tool to remove ticks and it’s sensible to own one if you live, work or do outdoor activities in high-risk areas, frequently walk or relax in woodlands or grass, or have pets or young children as these are more likely to come into contact with ticks. The HypaGuard Tick Remover is specially designed to remove ticks and is more suited to this than ordinary tweezers.

The early symptoms of Lyme disease

The clearest early symptom of Lyme disease comes in the form of a red circular rash around a tick bite, with can appear up to a month after initially being bitten. Sometimes this includes a very visible inner ring and then an outer ring, resembling a bull’s-eye on a dartboard. Unfortunately though, this isn’t always present, which can make diagnosis significantly more challenging. 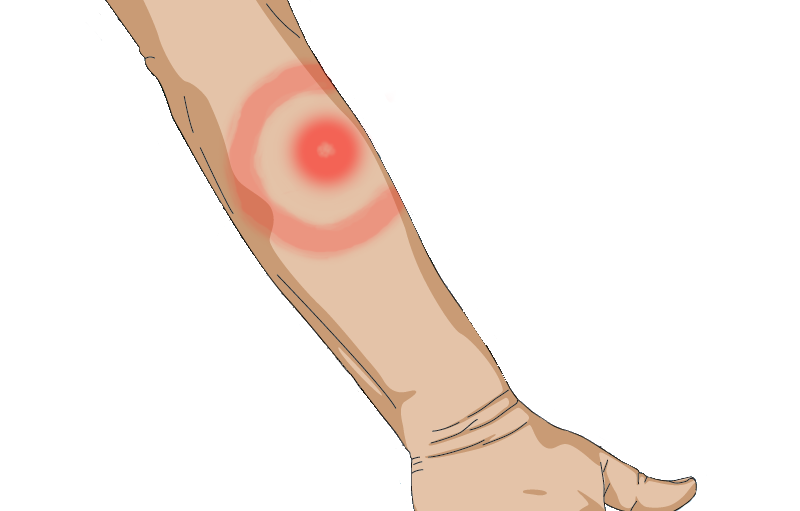 Some people also experience flu-like symptoms, which can include:

It’s important to note that most tick bites won’t result in Lyme disease, and the disease often won’t show up in tests for weeks after infection, so it’s not worth going to your GP every time you are bitten – wait for symptoms to appear first. You may be able to get the tick tested by a laboratory in the meantime. As long as your GP diagnoses Lyme disease correctly (though people have anecdotally reported problems regarding recognition of Lyme disease by some NHS doctors), you will be put on a two-three week course of antibiotics which should clear up the disease. It’s important to take the whole course of medicine, even if you start to feel better before it’s finished.

Lyme disease may cause ongoing long-term illness, known as post-infectious Lyme disease. This is thought to be uncommon, but its real prevalence is somewhat disputed. Speak to your doctor if you believe you have ongoing health problems following your treatment for Lyme disease.