We use cookies to give you a better service. Continue browsing if you're happy with this, or find out more about cookies.
Free UK Delivery on orders over £60*
Leading UK First Aid Manufacturer
Over 4000 products available in stock now
Home / Safety First Aid / Protect yourself against snakebites

Protect yourself against snakebites

Does your job or hobby take you into the countryside in foreign countries?

Does your job or hobby take you into the countryside in foreign countries? Whether you’re hiking, photographing wild animals, making a television program, carrying out a geological survey, or visiting rural communities, it’s important to be aware of the hidden dangers which could be lurking in the undergrowth. Here in the UK, we’re pretty safe from any wildlife. But around the world, it’s believed that hundreds of thousands of people are losing their lives to snakes each year.

As this map shows, snake bite deaths are highest in South Asia and Africa, with almost 50,000 people believed to lose their lives annually in India alone. South & Central America and Southeast Asia are also high-risk areas. The data in many countries is poor and official statistics are believed to massively under-represent the true number of deaths from snake bites, due to a combination of poor governance and under-reporting by people in rural communities – many of whom turn to traditional medicine rather than medical services, often because they can’t afford proper treatment. This means accurate data is impossible to come by. There are believed to be millions of cases of people being bitten by venomous snakes each year and as many as 250,000 deaths. Beyond the fatalities, many more snake bites lead to disability, with amputations common, causing huge strain on the victims’ families.

If you’re familiar with venomous snakes, you may notice a curiously low number of deaths in Australia and the US. These countries are actually home to some of the deadliest snakes in the world, however, the level of economic development, availability of good medical treatment and to some extent the habitat of the native snakes makes a huge difference. In South Asia, dangerous snakes inhabit the same agricultural lands which are toiled in by millions of often barefooted subsistence farmers. Treatment is often unavailable or unaffordable.

By contrast, in the US snakes tend to inhabit sparsely populated areas, agriculture is mechanised and anti-venom is readily available. The map below shows how many snake species are considered medically significant – venomous enough to make you ill, but not necessarily kill you. As you can see, the US and Australia have quite a few of them. Venomous snakes inhabit most countries in the world, with the exception of some islands and very northern or southern latitudes. Even the UK has one venomous snake; the common European adder, though it isn’t aggressive and hasn’t caused a fatality in over 2 decades. Its bite is very painful but rarely fatal to adults even without treatment (though immediate medical treatment should definitely be sought if you’re bitten). 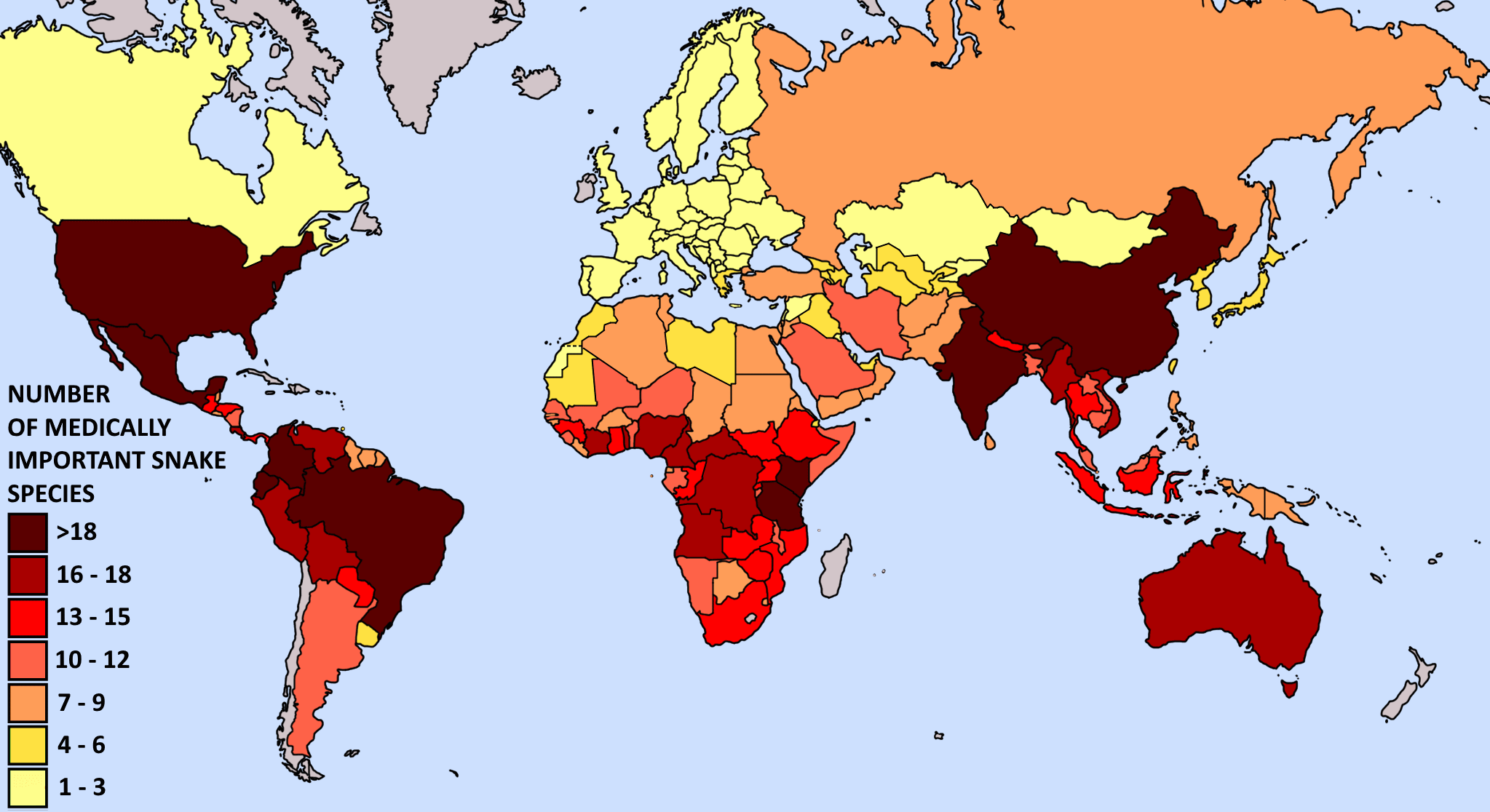 If you’re walking through vegetation in areas known to be inhabited by venomous snakes, particularly those which can kill a human, it’s sensible to take precautions. Avoiding the undergrowth altogether is impossible for some pursuits, of course, and snakes can be very hard to spot and many are well camouflaged. Often snakes prefer not to bite but will do so when stepped upon accidentally, others are more aggressive. Since you can’t eliminate the threat of being bitten entirely, it makes sense to wear protective clothing.

Alongside sturdy boots, TurtleSkin SnakeArmour Gaiters will protect you against most bites. The vast majority of snakebites occur on the feet and lower legs, so SnakeArmour is designed to protect you from the ankle up to the knee. These lightweight gaiters are worn over your clothing and are made with tightly woven high-strength ballistic fibres, preventing snake fangs from penetrating into your body. They also protect your legs from sharp foliage. Light and flexible, these gaiters are designed to offer the best possible snakebite protection without being an encumbrance.

Even if you’re out in the countryside in the US and Australia, wearing SnakeArmour makes perfect sense. You might be unlikely to die from a bite given the availability of good medical care, but there can be no doubt that a snakebite will ruin your day, halting whatever you’re doing in its tracks and making you incredibly unwell. If you’re in a remote area, bear in mind too that medical attention may eventually save your life, but could still take a long time to reach.