We use cookies to give you a better service. Continue browsing if you're happy with this, or find out more about cookies.
Free UK Delivery on orders over £60*
Leading UK First Aid Manufacturer
Over 4000 products available in stock now
Home / Safety First Aid / Do you know the difference between cardiac arrest and a heart attack?

Do you know the difference between cardiac arrest and a heart attack?

Firstly, what is a cardiac arrest?

Cardiac arrest is when the heart has stopped pumping blood around the body, leading to immediate loss of consciousness. The casualty will either stop breathing or be breathing highly irregularly.

Cardiac arrest is usually caused by an electrical problem with the heart, with the most common cause being an abnormal heart rhythm called ventricular fibrillation. Due to the chaotic electrical activity of the heart, rather than pumping blood, it quivers, or fibrillates. This is one of two ‘shockable’ kinds of cardiac arrest, meaning it can be treated using defibrillation. The other is pulseless ventricular tachycardia.

There are two ‘non-shockable’ kinds of cardiac arrest: Asystole, where there is no electrical activity or contraction in the heart, and pulseless electrical activity, which is more common. Both must still be treated with CPR, but an automatic external defibrillator will not issue a shock as this would not help. Asystole outside of hospital almost always results in death.

How common is cardiac arrest and how many people survive?

Cardiac arrest is significantly less survivable than many people think, which is understandable, as according to one study of popular TV dramas, resuscitation saved a patient’s life nearly 70 percent of the time, while the real life immediate survival rate (in hospital) is around half that. Outside of hospital, the situation is much worse.

Over 30,000 out-of-hospital cardiac arrests occur each year in the UK, and the survival rate is less than 10%. Part of the problem is that there is just a short period of up to six minutes to intervene before the casualty suffers irrevocable tissue death or brain damage. The Department of Health requires ambulance crews to reach the most seriously ill patients in an average time of seven minutes. Even when this happens, it’s often too late.

The chances of survival can, however, be significantly increased by immediate intervention from bystanders, through CPR (cardiopulmonary resuscitation), and where possible, defibrillation. CPR attempts have improved in recent years and it is now attempted in around 70% of cases. However, AEDs are still only used in a very small number of cases (10%).

For every minute without treatment, the chance of survival decreases by around 14%. Without any intervention from bystanders, the chances of survival are almost zero. However, CPR can treble the chances of survival and defibrillation before emergency services arrive can raise it to more than 50%. In short, rapid first aid by either trained first aiders or untrained bystanders is absolutely essential for saving a life when cardiac arrest happens outside of hospital.

Every second counts in cases of cardiac arrest, so it’s important to identify it quickly. Here’s how:

It’s important to commence CPR as fast as possible, but you must also always contact emergency services for cardiac arrest. If there are other people nearby, tell them to call for an ambulance immediately, and ask someone if they can find and retrieve a publically available automated external defibrillator (AED). Then commence CPR immediately.

If you’re alone, call for an ambulance first, then commence CPR as soon as possible. CPR is a series of chest compressions followed by rescue breaths. If you feel unable to give rescue breaths, then you can deliver hands-only CPR. If there is a first aid kit to hand, it may contain face-shields to allow you to give rescue breaths without making contact with the casualty.

The main goal of CPR is to pump the heart and keep a partially oxygenated supply of blood to the brain and vital organs, to prevent irreversible tissue death or brain damage before defibrillation is commenced or emergency services arrive. Without quick, effective CPR, the chances of death or disability for those that do survive are very high.

While anyone should attempt CPR if no trained person is available, training can significantly improve the effectiveness of the treatment. CPR is taught as part of Safety First Aid Training’s first aid courses.

Defibrillation involves the use of an AED, which shocks the casualty with the aim of restoring their normal heart rhythm, allowing oxygen to flow through their body again. AEDs are available in some public places, such as train stations and shopping centres, and some workplaces.

An AED is designed to be easy to use, including by untrained people. The AED issues clear voice instructions and will assess the casualty’s heart rhythm to see if they should be shocked. An AED will not shock someone who does not need it, and cannot cause harm. As it’s impossible to tell if a casualty’s heart condition is shockable or non-shockable, an AED should always be used when someone has suffered cardiac arrest. Some AEDs work completely automatically, others may require a person to press a button to issue a shock.

To reiterate, if someone does not need a shock, or if their condition is non-shockable, then the AED will not shock them.

Click here to browse our wide range of AEDs from leading manufacturers.

So what is a heart attack? 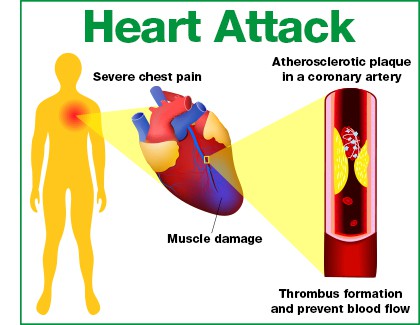 Scientifically known as a myocardial infarction, a heart attack is also a serious medical emergency and you should dial 999 if you suspect you are, or someone else is, suffering a heart attack. A heart attack happens when there is a sudden loss of blood flow to part of the heart muscle. Most heart attacks are caused by coronary heart disease, and occur when one of the coronary arteries is blocked.

While the symptoms vary from person to person, the most common symptoms are:

What should you do?

Phone 999 and request an ambulance immediately if you suspect a heart attack. The casualty must then sit and rest until the ambulance arrives: any movement could put unnecessary strain on the heart. If aspirin is available, get the casualty to chew on one, unless they’ve been told not to by a doctor because of an allergy or any other reason. If you’re suffering a heart attack yourself, you shouldn’t get up to look for aspirin.

If the sufferer isn’t sure if they are allergic to aspirin or not, then they should not take it.